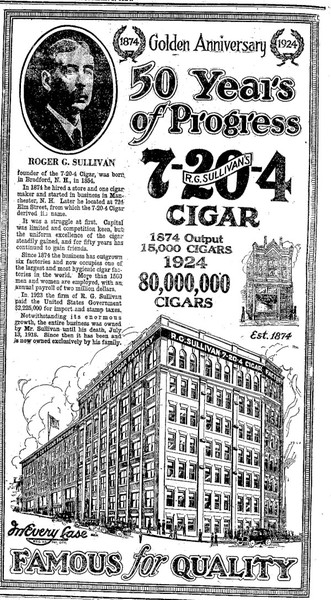 Hayes Soloway PC can be found on the fifth floor of the historic R. G. Sullivan building. Constructed in 1913, the R.G. Sullivan building housed the 7-20-4 Cigar Company. As one of the premiere cigar makers in the country, Roger Sullivan made cigars with pure Havana tobacco and imported Sumatra wrapper. The company operated from 1875 to 1963. The company name, 7-20-4, comes from the company's original address at 724 Elm Street.

As described in the advertisement on the left, Roger G. Sullivan started his business in 1874 at the age of 20.  Competition was difficult early on with only one employee, but the quality of the product set these cigars apart. On their 50th anniversary, the 7-20-4 Cigar Company was selling 80 million cigars annually and employed 1500 people with an annual payroll of $2,000,000.00 and an equal sum was paid to the government for import and stamp taxes. Roger Sullivan passed away in 1918, leaving the business to his family.

Hayes Soloway PC has been providing quality patent and trademark services from the R.G. Sullivan building for more than 25 years.  We look forward to your visit and are ready to assist you.